How To Do The Pizza Dance!

So do you think the purpose of the pizza dance is to workout as you eat your pizza?  Or is it to distract the person you want to steal the pizza from? Regardless, I’m thankful for the detailed dance instructions!

Could this be the next macarena dance sensation for the weddings and parties? It definitely has that annoying addictive potential.  Here you can see how you and your buddies or fellow stranger pizza dancers would appear dancing with a pizza slice in a group.

Like it? Alright then get to it and start your pizza dance practice today! 🙂

My Tea For The Moment: If i could I would make some iced tea right now but I’m trying Twinnings Pure Camomile that’s made with pure golden camomile. I personally really like this particular brand.  Just give it a try the next time you’re not feeling well or coming down with a cold. Just add a little honey and you will be on your way to some nice relaxing time.

Posted in Chai Tea, funny video, Good To Know, I Want To Laugh!, This is crazy!

Alright guys it’s time for me to go on a mini break. My finals begin next week! If all goes well, I shall return once the nightmare is over in two weeks!  Remember don’t worry, drink lots of chai, tea, coffee, hot cocoa, whatever you need to get through all your projects, papers, exams,  final thesis, or life in the next few weeks in general.  I leave you guys with some of my favorite musical compositions  that you can listen to while you study or just take a break.

There’s a whole album on concentration! Here’s one with beautiful pictures of Venice.

My tea for the moment: Okay so besides going through the whole finals stress bit, I got sick this week as well.  The nasty cold finally caught me!  I’ve been coughing up a storm and the three teas that seemed to work on my throat were STASH’s Chamomile caffeine free herbal tea, Lemon Ginger caffeine free herbal tea and Chai White Tea.  All with a couple spoons of honey. Of course I didn’t drink all three at once but yes, I did drink them in all in a day.  I was basically just trying to fix my self as much as possible before my class and they each seem to have some key ingredient like Chamomile, Lemon, Ginger, Cinnamon etc so I thought hey why not!

Guys… I think I’m hearing voices! Okay now before you jump to conclusions and ignore me like the parents of the sane kid  in a horror movie who tells the parents that he or she is hearing stuff but instead of listening or believing in the child they just declare him or her insane and  ship them to the nearest shrink, Phew!  Just hear me out.  So for the past few days, I’ve been hearing voices or more like cryings of a kid particularly around the bathroom walls.   First I was like hey, someone give this kid some bubbles! Because you know bubbles are awesome and they always cheer people up! But then, his constant combo of crying and laughing at the same time, started reminding of all the creepy little kids that have haunted us for so many years.

4 most creepy little kids that just give me the creepers! 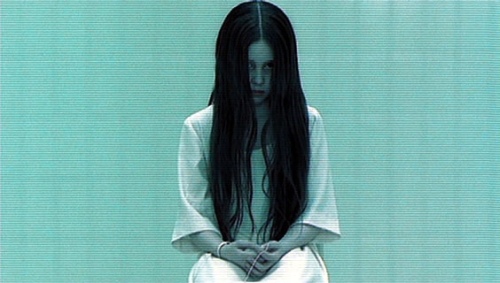 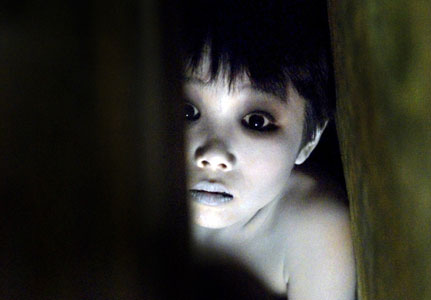 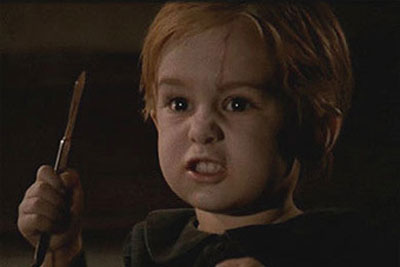 1.  The most creepy and perhaps horrifying kid of all time has to be Regan from “The Exorcist” (1973).  There are just too many creepy scenes but the head rotating thing and the backwards stair walk is enough to creep you out for life! 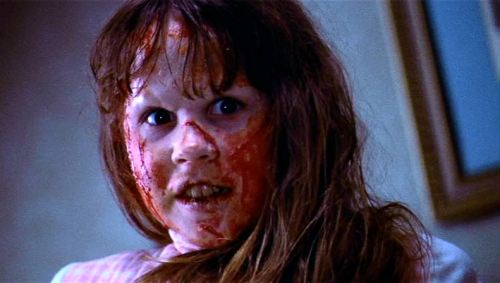 Now after revisiting some of these creepy kids, I’m sure you all need a little laugh!  First, the funny George Lopez just started the “Creepy Little White Girl” bit on his show.  So check it out, it should you creep you into some laughter.

Finally not all babies are creepy,  this one is so cute and makes me want to laugh like crazy every single time I watch it!

My tea of the moment: How about some STASH peppermint caffeine free herbal tea.  If you like minty stuff then this is for you.  Creepy kids and minty tea now doesn’t that just cheer you up! hehe.  Enjoy!

Posted in Chai Tea, Entertainment, Good To Know, I love lists!, This is crazy!

Well hello there, I thought i should share this great find as we all continue to recover from a very exciting Halloween weekend and face the real world.  So are you ready for a rather seductive coffee or tea break? Yes you say? Hmm…good, now all you have to do for a “more seductive break” is sit back and relax and watch the “The Carte Noire Readers” read your favorite literary love scene oh la la la.  Hopefully you got your own cube and a good set of headphones at work.  Are you ready? They will only begin if you’re sitting comfortably. Okay here it is, the suave Greg Wise reading a scene from Jane’s Austen’s Persuasion.

Speaking of Jane Austen, have you guys checked out this book trailer of the mashup Sense and Sensibility and Sea Monsters yet? It’s funny! 🙂

Still need more laughs? Then check out Austenbook, a Facebook newsfeed for Pride and Prejudice.

Hope you enjoy it, Happy Monday!

My tea for the moment: I’m trying out STASH’s premium Mango Passionfruit caffeine free herbal tea.  Hmm…it has a very citric taste to it, so if you like that, then try it out.

Now why didn’t I think of turning my old tapes into cool art? Hmm…well no worries, I think i just got an idea as to what I can do with my mountain of magazines back home! Ahh i love it, Imagine a giant paper  skeleton left standing in the recycling bin! I would love to see the reaction of the recycling truck man who by the way for some reason left all those magazine bags i left for them to pick up during this past hot summer.  Was it because it got too heavy for you? or because I broke some recycling bin code when i put 5 bags instead of 2 or what?   I’m just saying I haven’t forgotten that episode and I’m still upset!  It was a lot of hard work slaving away in the garage and getting tortured by spiders and other nasty insects that seemed to be all into reading all of a sudden okay.  And seriously spiders, what’s wrong with you?  Do you think I’m Little Miss Muffet and you will just frighten me away? Okay I was frightened a little bit when one of you decided to read along with me while I had the pile of magazine in my lap. Man, all those magazines up in the air was a huge mess, so thanks a lot spiders!

Going back to the old tapes, here is an example of the cool cassette tape art from artist Brian Dettmer. 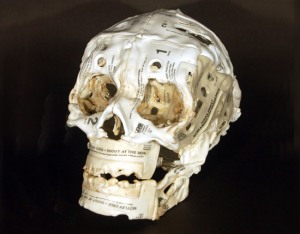 What do you guys think?

My tea for the moment:  I normally enjoy floral flavored teas but today I’m trying out Wild Raspberry (Caffeine Free) herbal tea from STASH. Wow this is a perfect mix, skeletons and red color tea! How nice, but seriously I don’t think I care for berry flavor teas, it’s a little too sour for me. But I’m not giving up yet or at least until I finish this whole sampler box I just got!

Posted in Cool Art and Design